If you've ever heard news that scientists have discovered that "such-and-such everyday object has more bacteria than a toilet seat," you're probably familiar with the work of Dr. Charles Gerba — whether you realize it or not. He's a microbiologist at the University of Arizona, but his friends and colleagues call him Dr. Germ. Why? He has dedicated his life to publishing countless studies on the germs that infiltrate our everyday lives, and is one of America's chief experts on the topic.

And since he's spent decades studying toilet spray, kitchen sponge germs, how quickly viruses can spread around an office, and more, we were dying to ask: How does he clean his own home, and generally keep germs at bay? Here's what we found out.

HE WORRIES MORE ABOUT THE KITCHEN THAN THE BATHROOM.

Dr. Gerba says that since we've been conditioned to want to clean our bathroom regularly (it just seems like the grossest spot, doesn't it?), we don't overlook it like we do the kitchen. "Americans are terrified of their toilet seats," he says, "So that and bathroom sinks, the tap, and the floor are usually cleaner than the kitchen. Plus, the kitchen is where kids are usually coming into after playing."

What spots deserve a little bit more of your attention? Well, Dr. Gerba half-jokingly calls the trusty sponge "an evil object" — it likely has more fecal bacteria than your toilet, and so he changes his out at least once a month.

"Cutting boards would be high on my list, too," he says. "From testing them, we've noticed that they seem to be neglected — and you should also remember to have dedicated ones for vegetables and others for meats. The fridge door handle can get pretty bad too, since its high-use and people tend to hang towels there. Same goes for kitchen faucets."

HE PAYS ESPECIALLY CLOSE ATTENTION TO THE BOTTOM OF THE FRIDGE.

"Everything drips and drops down there," he says. "So anything stored on the bottom of the fridge is that much more likely to get contaminated. And it's the first place that will get mold."

AND HE CRINGES WHEN HE SEES PURSES ON COUNTERTOPS.

We're sure Dr. Gerba isn't following his wife around with a disinfectant wipe (or we hope he isn't), but we have to point out his revulsion at something many of us ladies probably do every day. "A quarter of purses have E-coli on them," he says. "And we found out people put them right next to where they're about to make a sandwich!" 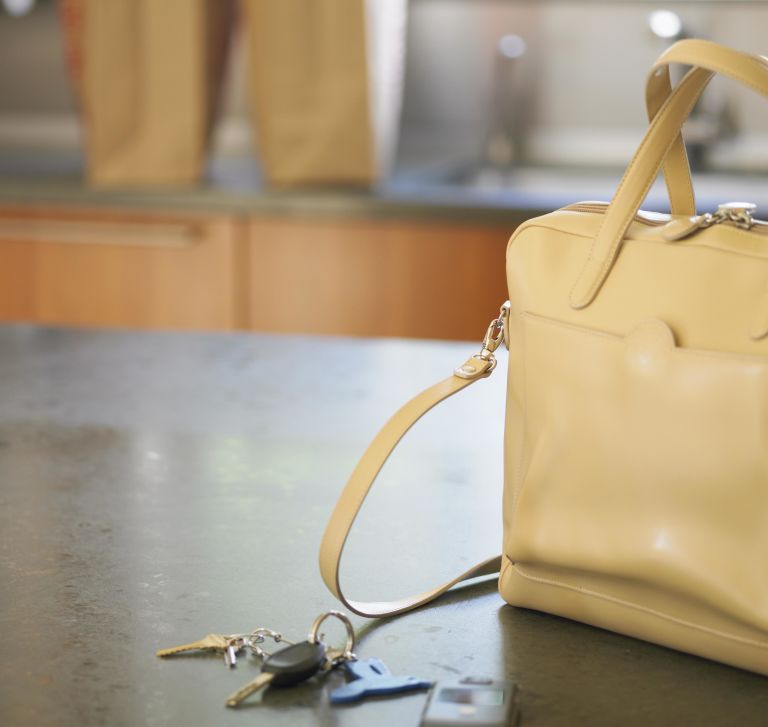 BUT HE DOESN'T WORRY TOO MUCH ABOUT FLOORS ANYMORE.

When it comes to the space below our feet, Dr. Gerba's logical side comes through loud and clear: "I don't have kids crawling around anymore — and I'm not crawling around on the floor either — so it's one of the things I clean least now," he says. "But then my wife doesn't like it when we start sticking to the floor!" Whoops — maybe pull out that Swiffer a little bit more often, huh, Dr. G?

HE MAKES SURE TO WASH REUSABLE GROCERY BAGS REGULARLY.

"There should be warnings that come with these," says Dr. Gerba. "50% of people never wash them, and they have more bacteria in them than your underwear — and your car is like the incubator."

Because people consider these bags "eco-friendly" or otherwise generally virtuous, they tend to forget that they're just stuff that gets dirty and harbors bacteria — like anything else you handle often. But these bags hold your food, which makes the situation that much more icky.

Dr. Gerba's family chooses grocery bags that are easily washable, and they own a variety to limit cross-contamination between food. "My wife got us reusable bags in different colors — certain ones for meat, others for cans, and others for produce," he says.

HE SUGGESTS YOU WASH HAND TOWELS ABOUT ONCE A WEEK — BUT HE'S GENERALLY SWITCHED TO PAPER TOWELS.

"I used to wipe my face on a towel in the morning, but now I can't do it," says Dr. Gerba. "I know there's E.coli on it!" He says you should change out face and hand towels at least once a week — and more often if you have small children.

"I tend to use a paper towels a lot now," he continues. "Some people say that's not environmentally friendly, but you'll sure use a lot of toilet paper if you get diarrhea!" 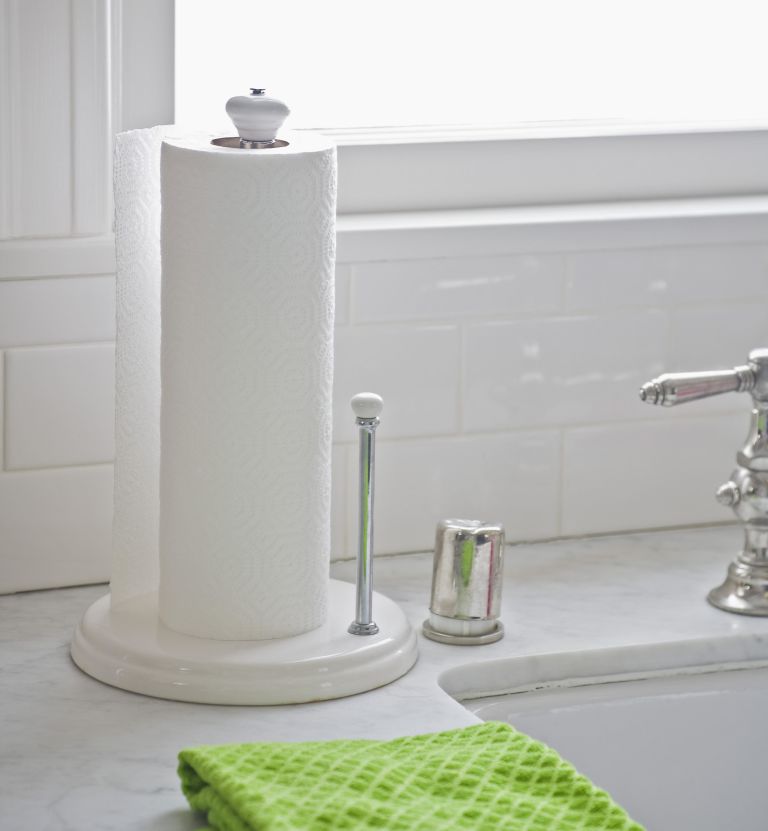 HE PREFERS DISINFECTANT WIPES OVER SPRAYS.

"If you use a spray, you're supposed to wet the area and let it sit for 10 minutes, which no one does," says Dr. Gerba. "I like using the wipes, and in our research we've found that they're just as good as bleach for disinfecting."

But he also reminds us that you can't rely on one wipe to disinfect your entire kitchen – if you wipe one on multiple spots you might just spread bacteria around. "One can clean about a meter square of space — to clean the kitchen, it usually takes me about three of them."

HE LIKELY USES HAND SANITIZER WAY MORE THAN YOU DO.

"Strategically, I use hand sanitizer about four or five times a day," says Dr. Gerba. He recognizes what you might have heard about the stuff in recent years — that antimicrobial sanitizers and soaps might not be all that much better than hand-washing, and at worst, could contribute to the growth of antibiotic-resistant bacteria. However, more research needs to be done and it seems the more worrisome products are those that contain triclosan, which hand sanitizer does not — it generally relies on alcohol to kill germs.

"My personal opinion is that it's better than just washing your hands," says Dr. Gerba, citing the fact that getting hand-washing right is harder than we realize. "You have to wash your hands for 15 to 20 seconds, and then you re-contaminate them again when you touch the bathroom doorknob — and worse if it's a public restroom. Most bacteria is on your hands, and research shows you get ill less often if you use hand sanitizer."

HE'LL EVEN PULL OUT THE HAND SANITIZER AFTER DOING LAUNDRY.

"We've tested people's hands after they've taken wet laundry and put it into the dryer, and there was E.coli on them," Dr. Gerba says. Why? Because the bacteria from your laundry (including the worst offenders like underwear and bath towels) doesn't get washed down the drain. It collects in the washer's drum, and detergent isn't enough to kill the bacteria (you need hot water and/or bleach to do that). 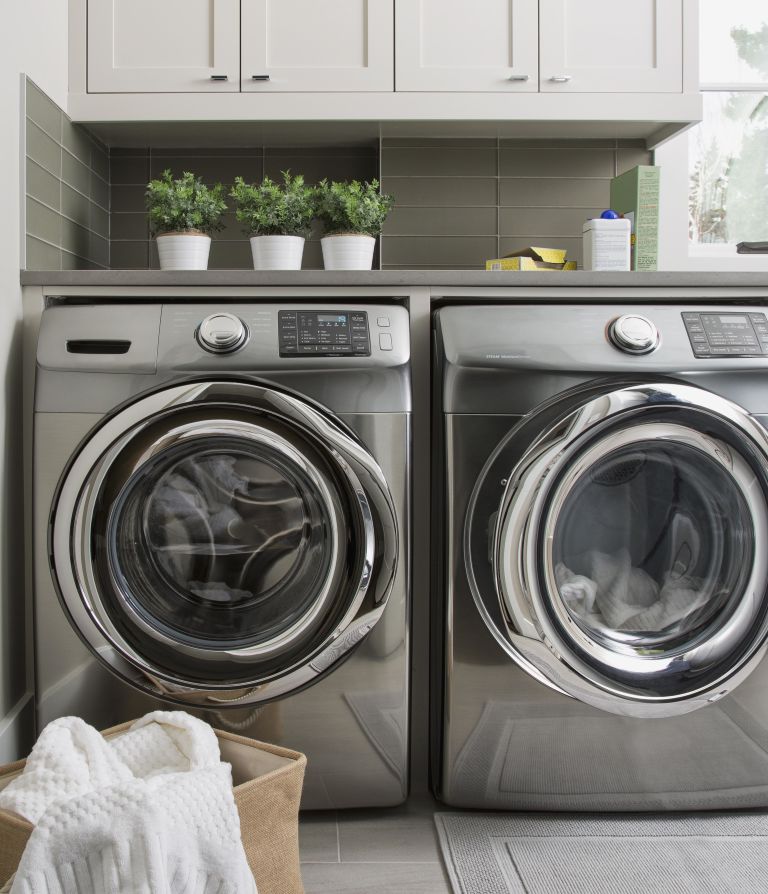 AND AFTER HIS GRANDCHILDREN PLAY ON PLAYGROUNDS — THAT IS, IF HE LETS THEM GO NEAR A PLAYGROUND AT ALL.

"I won't let my grandchildren go into playgrounds, though some of them do have hand sanitizing stations these days," Dr. Gerba says. "Playgrounds are essentially public toilets for birds, and you'll never see, say, a soccer ball without E.coli on it. Anytime we have little kids over we make them use hand sanitizer — we've tested kids hands and they all have E.coli on them."